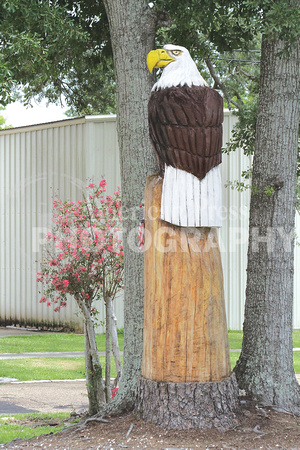 There’s a new cat in town, and his name is Robert, but not really. Donna Richard said the latest chainsaw sculpture in Downtown Lake Charles represents all the loving cats in her neighborhood. However, Robert, a neighbor’s cat, gets special kudos for having served as the official model for the piece done by chainsaw artist Della Meredith of La Porte, Texas.
The cat can be seen on Louisiana Ave. at 2nd Street. Passersby will first notice a chainsaw eagle by the street, also done by Meredith, about a year ago. Looking back from the eagle, one can spot the eagle’s new companion piece, the cat who is not really Robert.
Richard said the trees that became the eagle and the cat were not destroyed in Hurricane Laura, but both were severely weakened in the freeze of Feb. 2021 and never fully recovered. To avoid them coming down in any future weather events, they were instead turned into art.For Della to do her sculpture, she works with a 10-foot stump or less, said Richard.
© American Press
Powered by ZENFOLIO User Agreement
Cancel
Continue