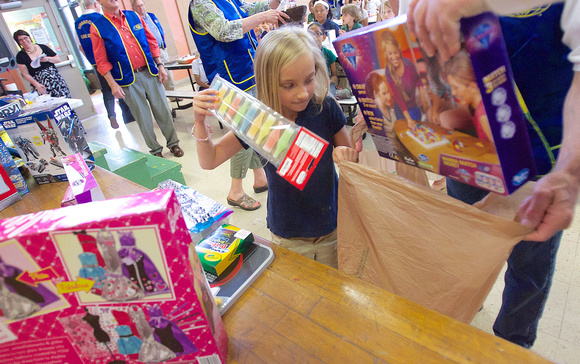 Henry Heights student Nena Broussard stuffs all the prizes she won in a bag to take home after her name was drawn for the grand prize.

Bringing Up Grades (BUGS) is a Kiwanis International service leadership project in which local Kiwanis clubs identify elementary schools with at risk children and partner with such schools to encourage and reward 3rd, 4th, and 5th grade students to maintain their current school subject scores and raise at least one score upward from the previous level. At the end of the second school year grading period, those 3rd grade students who have done so are treated to a special party in which they are given treats such as pizza, cupcakes, and special cold drinks, along with a BUGS T-shirt to recognize them for their good work. Continuous good work by 4th and 5th grade students is rewarded with other small prizes.
At the end of the school year, all BUGS are treated to a special party in which in addition to the treats specified above and other small gifts, these students are eligible to participate in a drawing for valuable prizes. Thus, if a student was a BUG for one nine week period, he or she is able to participate once in the drawing. If the student was a BUG twice, he or she is able to participate two times in the drawing.
BUGS is a system of rewarding good work and encouraging students to maintain their focus and determination to develop good study habits that will serve them throughout their student years and, indeed, throughout life.
The Kiwanis Club of Lake Charles has partnered with Henry Heights Elementary School for the past seven (7) years to reward children who have and are participating in the BUGS project. Over those years, the Kiwanis Club of Lake Charles has purchased nearly $5,000.00 of food, drinks, T-shirts, special prizes, and other items that have been provided to Henry Heights Elementary School students. Funds to support such community projects as BUGS are derived from fund raising projects in which the Kiwanis Club of Lake Charles engages.
© American Press
Powered by ZENFOLIO User Agreement
Cancel
Continue